This might be our family's most requested birthday cake from now on. The recipe comes from a friend from church, Wendy. She is very popular at our house right now:-).

I first tasted this cake at Wendy's house during a Youth Council meeting. I could not figure out how they made it and was in awe of the flavor that seemed to take me back to my childhood. The layering impressed the dickens out of me and while I knew I was going to ask for the recipe, I was afraid it would look too involved.

I was wrong. This cake can be put together in 10 minutes flat. It calls for very few ingredients and it was a hit with everyone who ate of it. Please find some excuse to make this. Is there a birthday coming up? An anniversary? All I can say is that you better think of something. 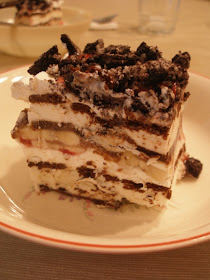 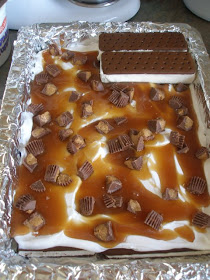 Depending on how cold your freezer is, you may need to thaw it on the counter for 10-15 minutes before serving. 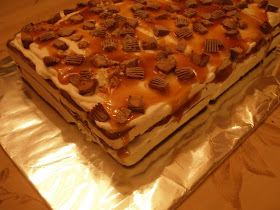 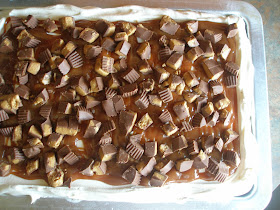 Now, I guess I could have made some homemade ice cream from local milk, baked my own chocolate wafers, whipped up some real whipped cream, made my own caramel sauce and candy.


But, oh, I would have missed the taste of those store-bought ice cream sandwiches I remember growing up. That, and, I would have pretty much gone insane. This pregnancy has lead to some short-cuts and eating this cake has made the idea of short-cuts much easier to deal with.
You Can Call Me Jane at 9:30 AM
Share

Just a friendly reminder, if you know me personally please try to refrain from using my name. There are those who may try to locate me, break into my pantry and steal my pickled beets. Thanks:-).